Here is another large suncatcher.  This is for
another sweet lady friend of ours.
It's tatted in Yarnplayer's HDT size 40 Raspberry
Sorbet. 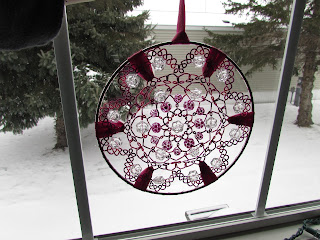 It's another one of a kind. With large glass beads. 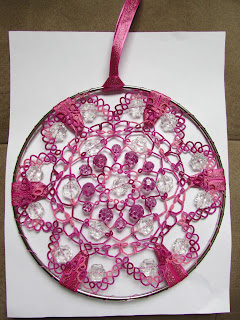 Here is a close up of the center. 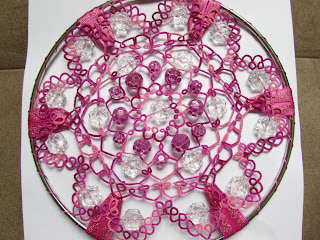 Funny thing is that I bought this gorgeous thread
not knowing what I was going to do with it, but
I just had to have it.  2 weeks later I found out
pink is our friend's favorite color and I knew
immediately what it was going to be used for!!
Happy tatting everyone!!!
And Merry Christmas!!!  :)

Finally another update for you!!!

Well, I finished another round on the next large suncatcher.
It is inspired by the final round of the Renulek Spring 2016
Spring Doily. 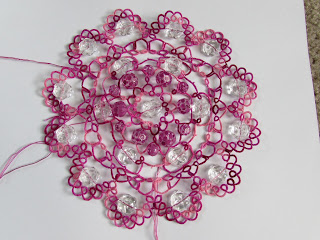 All I have to do is figure out how I am joining it to
the ring and I will have a finished project.  Oh,
I have already sewn in the ends since the pictures. 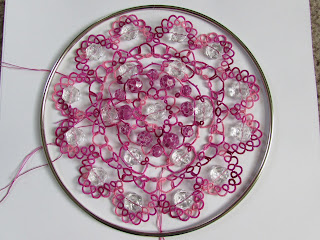 Got a chance to finish the row!!

My hubby had to work tonight so I got a chance
to finish this row.
It's night out so I had to use the flash on my
camera and the zoom, but I love how it shows
the detail of the doily!!  :) 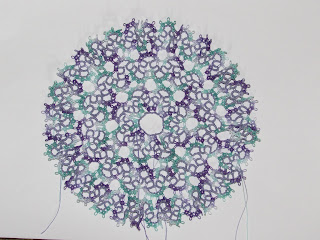 Happy tatting!!
Hope you are getting your holiday items finished!!  :)

Here's some pictures to show the
design now that it is being blocked. 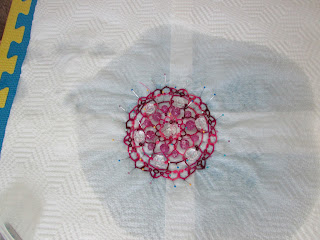 The color of the thread darkened while wet, but
I think when it's dry it will match the beads again.
I like the design, but wish it had more space and
didn't have to be stretched to death to get it "open". 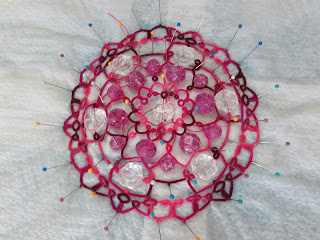 I probably have 2 more rounds to fit the ring.
Happy tatting everyone!!!  :)

I am still trying to get progress accomplished on these!!!

Made some progress tonight while hubby had a
job outside of the house for a little while.
I was hoping to have this round done, but I just
can't stay up any later(it's almost midnight here).
This is the Mystery Doily for those who don't know. 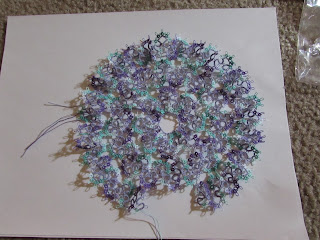 And this project is taking forever due to me having
to design it.  At least this one can sit out and be
tatted in front of hubby without problems of him
claiming it-since he knows it's a Christmas gift!
It will be a large suncatcher when done(when!).
I believe it will take some blocking as the other
one did, before it will gone on after this round. 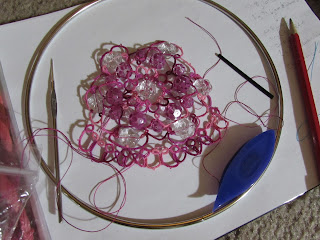 I have continued working on this large suncatcher,
but I am realizing that for me designing takes lots
of time and thinking, some drawing, and some cutting.
I love this round!!!  It's not what I was originally
thinking, but it's so "cute".  :) 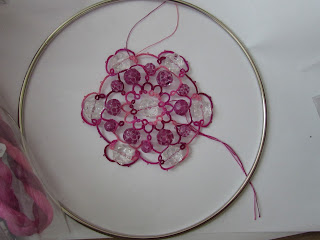 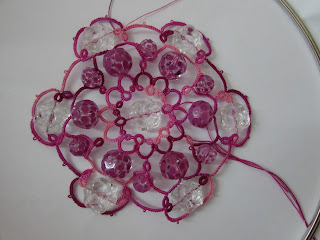 Having to wait till next week to continue due to
a granddaughter invasion, and preparation for it.
Have a fabulous tatting time!!!  :)
Posted by God's Kid at 1:39 PM 2 comments:

Next Christmas Secret in progress.

Here's the start.
I am using Yarnplayer's new HDT Raspberry Sorbet.
And the beads with the pink are heavy glass, and
the clear beads are shaped like roses and seem to be
glass.  I am now working on what's next in the tatting
of the next round. 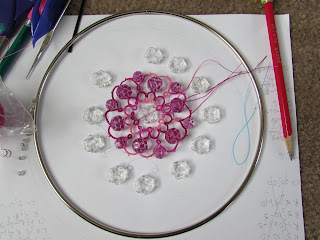 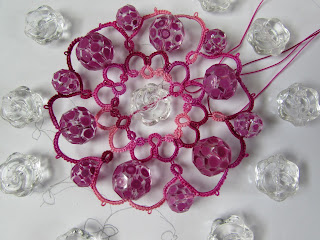 Happy tatting and have a wonderful weekend!!!  :)

God's Kid
I am a Christian. I love God, my family, friends, and kids! I am a stay at home wife, mother of three adult girls, and Grandmother of two beautiful girls. Married 34 yrs. I have been tatting since 2010 and love it!! :) I teach a Sunday morning group named Life in Christ from Spring till Autumn outdoors, and I teach a Sunday night group of seniors.